Here I'm not about Kestrel and .NET core. It's article about classic things — Windows, IIS and ASP.NET pools in it. I just bring it all together from different official sources, posts of respected authors and from my personal observations and scrutinizing of Microsoft code.

Windows and IIS are optimized to use hardware. Keeping of TCP connection can be off-loaded to the server-class network card (they have own TCP/IP stack support), while HTTP protocol is processed in kernel mode driver. This dramatically reduces the number of interruptions and context switches, giving more CPU power to perform your code.

It means, that request is passed from kernel to w3wp.exe (executable representing application pool and running under its credentials) directly. There's only one transfer from kernel to user mode (CPU terms) to exactly that user, under which application runs.

Some security is implemented in the kernel, interfacing (through SSPI) to both kernel and w3wp.exe.

Look at the picture: 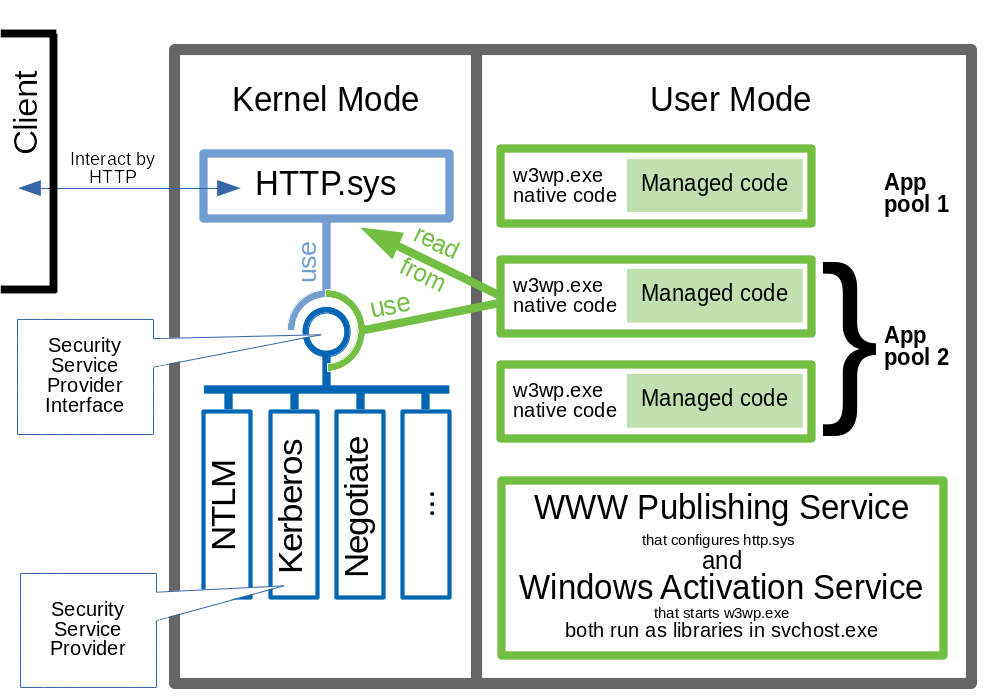 First, take attention at the user mode part. Each combination of "w3wp.exe native code" (green rectangles) and "Managed code" (inside of it) is a single process from OS perspective. Managed code is loaded by Common Language Runtime (which is native DLL itself) inside of the w3wp.exe space.

NTLM, Kerberos and Negotiate protocols are implemented by Security Support Providers in kernel mode. Negotiate is not authentication protocol itself, it's a module used to negotiate one — Kerberos or NTLM. The only way to enable Kerberos in IIS is by enabling Negotiate for Windows Authentication.

For Kerberos protocol to work, there should be a key, belonging to a service account, for decryption of service access ticket (issued by KDC for a client). This service account (to which key belongs to) depend on configuration:

For Kerberos and SPN consult this article.

For more about request processing pipeline read in ASP.NET Application Life Cycle Overview for IIS 7.0 (it's old but informative) or in the source code of HttpApplication, HttpRuntime and related classes in Reference Source of .NET Framework.

For every request w3wp.exe forks an OS thread (native thing) and associate pooled instance of HttpApplication class (managed) to it. You can check these instances as counter in Performance Monitoring and understand how many requests was processed in parallel just a moment before.

New w3wp.exe OS thread doesn't have correct windows user authentication token attached to it. Such token assignment can be made only in native code. Therefore, windows authentication is processed by two modules:

Despite the matter of protocols and using or not of SSPI, from the perspective of application, authentication is the presence of trusted information about the principal. In ASP.NET such information is expected to be in HttpContext.Current.User and Thread.CurrentPrincipal.

I said "Federated authentication modules" (plural form) not by mistake. In contrast to forms module, there are two managed modules for federated auth:

Both federated modules has to be added explicitly in Web.Config, while forms module is auto-added by IIS if forms authentication is configured.

Handlers of the authenticate event in all Microsoft modules take care of existing user passed in HttpContext. If HttpContext.User is not null then module skips its work because it means that the user is somehow authenticated by another module.

How, possibly, you can alter authentication behaviour:

See example of Mixing WS-Federation and Windows Authentication in IIS.